Our research group focuses on structural and functional characterization of proteins and some other natural compounds that interact with biological and artificial lipid membranes, form transmembrane pores and/or remodel membranes, and on potential use of these proteins and natural compounds in biomedicine, pharmacy and other fields. We are using standard biochemical preparative and analytical methods and molecular biology techniques. We are preparing and characterizing model lipid forms such as artificial lipid vesicles of different sizes (SUV, LUV, GUV), lipid droplets and Langmuir lipid monolayers. We are using refractometry (surface plasmon resonance and microbalance-based surface tensiometry) to measure kinetics and interaction affinity of proteins with lipid membranes or other ligands (proteins, nucleic acids, and smaller ligands). We are characterizing enzymatic activity (especially cholinesterases and enzymes involved in oxidative stress) in biological samples and perform kinetic analyses of enzyme activity. As part of our research facilities, we also run Infrastructural Centre for Molecular Interactions Analysis. 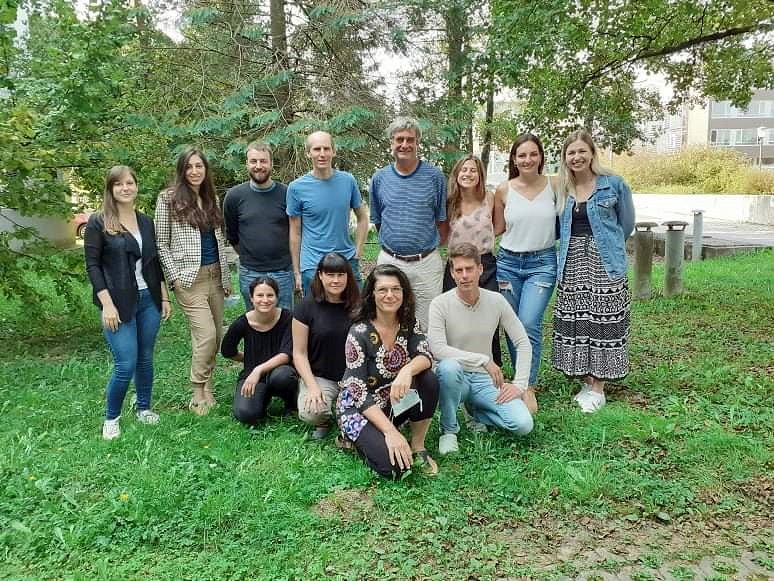 Actinoporins (Pfam 06369) are basic, ~20 kDa α-pore forming toxins originally isolated from sea anemones. These lethal proteins are produced monomeric and they bind to artificial and biological membranes containing sphingomyelin and form transmembrane pores by oligomerization of several monomers and protrusion of their N-terminal α-helix across lipid bilayer to built a hydrophilic pore of ~2 nm in diameter. Equinatoxins from the sea anemone Actinia equina are higly cytolytic, cytotoxic and cardiotoxic representatives that have been studied in our lab for more than two decades. 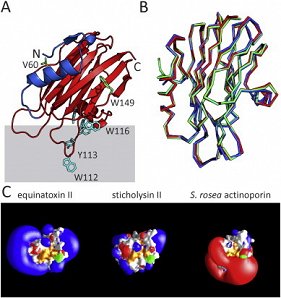 In 2002, our group isolated and described 15 kDa proteins from edible oyster mushrooms (Pleurotus ostreatus) and black poplar mushrooms (Agrocybe aegerita) and named them ostreolysin and aegerolysin. After the latter, the whole family was named aegerolysins. Currently, the aegerolysin family (Pfam06355, Aegerolysin Superfamily cl05705) counts over 400 representatives. So far, they have been detected in fungi, plants and some pathogenic bacteria such as Pseudomonas aeruginosa and Vibrio cholerae. A common property of aegerolysins is their interaction with membrane lipids. Some aegerolysins bind specifically to sphingomyelin, the major sphingolipid in vertebrate membranes. The high-affinity receptor of all aegerolysins tested to date is ceramide phosphoethanolamine, the most abundant sphingolipid in invertebrate membranes. In combination with proteins with the membrane-attack/perforin (MACPF) domain, aegerolysins can form binary cytolytic complexes and form transmembrane pores in artificial and biological membranes containing thea egerolysin-specific lipid receptor.

The property of aegerolysins to specifically recognize and bind to invertebrate membrane sphingolipids, as well as the presence of proteins with the MACPF domain in the same organisms, gives these proteins the potential to develop agents to control various pests. In collaboration with colleagues from the Agricultural Institute of Slovenia, we found that protein complexes based on oyster mushroom-derived aegerolysins are selectively toxic to two important plant pests: the Colorado potato beetle and the western corn rootworm, due to their stable interaction with membrane lipids. The toxicity of these complexes against the western corn rootworm is comparable to the toxicity of commercially available protein complexes from Bacillus thuringiensis; in the case of the Colorado potato beetle, the toxicity is even greater.

Due to their ability to specifically recognize membrane lipids, aegerolysins are also of interest as mebrane lipid markers. In our laboratory, we have produced and isolated recombinant, fluorescently labeled aegerolysin ostreolysin A (OlyA-mCherry), which was shown to bind to cholesterol- and sphingomyelin-rich regions in mammalian cell membranes. Using the aforementioned marker, we were also able to demonstrate the existence of these domains in living cells and observe their dynamics. In the future, the developed molecule could serve as a key tool in basic and applied biomedical research of membrane raft biology and related pathological conditions. 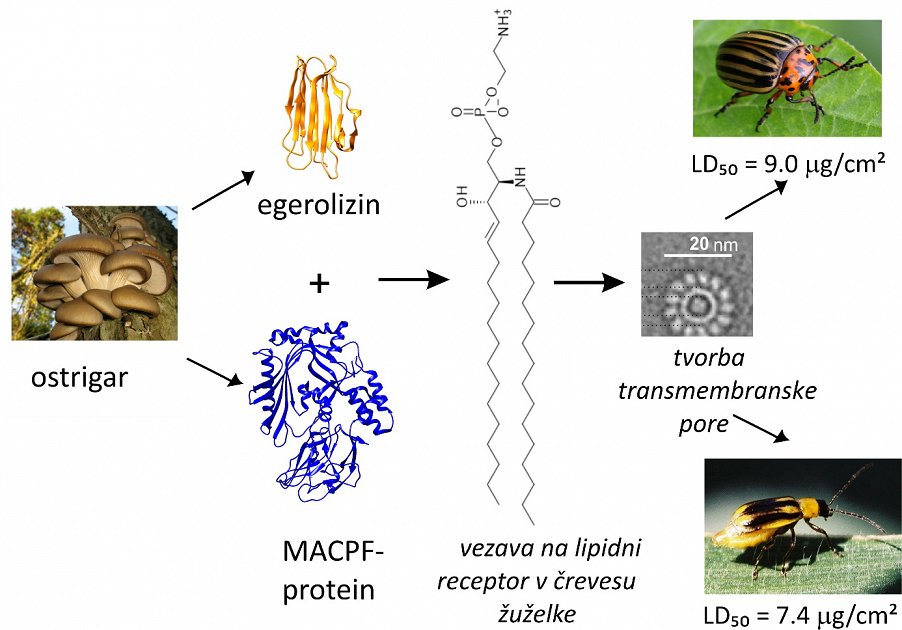 Mechanism of the insecticidal action of protein complexes from Pleurotus mushrooms. Mushrooms from genus Pleurotus sp. produce aegerolysins and MACPF-domain-bearing proteins. Upon recognition of the insect-specific membrane lipid receptor, the aegerolysin protein binds to the membrane and recruits the MACPF partner protein, to undergo extensive conformational changes and to form multimeric bi-component transmembrane pores that can permeabilise midgut cell membranes of the Colorado potato beetle or the western corn rootworm, and cause the death of the insects. LD50 for Colorado potato beetle larvae treated with OlyA6/PlyB (day 4; top right) and western corn rootworm larvae treated with OlyA6/PlyB (day 7; bottom right) are shown. Adapted from Panevska et al., 2019, Scientific Reports, 9, 1: 5073.

The ability of bacteria to tune their transcriptional programs (e.g. virulence or antibiotic resistance genes) in response to specific signals and changing environments plays a determining role in defining their pathogenic potential. There is a necessity to uncover the hidden layers of bacterial genome complexity and understand their functioning in order to perturb these mechanisms in pathogens. Few years ago we developed a »DNA sampling« protocol that enables rapid isolation of specific DNA fragments with firmly bound proteins in E. coli cells (Figure). We aim to improve the current DNA-sampling protocol and combine it with statistical and machine learning methods to be able to detect under native conditions all the proteins associated with selected genomic loci in indigenous and pathogenic bacteria. In addition, the method will enable us to detect also the methylation profile of the target DNA and to assay the promoter activity of the DNA fragment to be sampled.

Schematic representation of the DNA sampling method, adapted from Grainger DC et al., Curr Opin Microbiol 2009. The colored dots (green, red, blue) represent different proteins bound to the DNA in a bacterial cell. The pASCBR-DL1 plasmid is not shown. Co-induction of I-SceI and bacteriophage lambda Gam protein ensures liberation of the nucleoprotein complex and its stability. After cell lysis, a host-encoded epitope (flag)-tagged LacI (yellow) facilitates purification of the fragment together with accompanying proteins (green, blue) that are identified by SDS PAGE / mass spectrometry analysis.

Polymeric 3-alkylpyridinium salts (poly-APS or APS) were isolated from the marine sponge Reniera sarai. These compounds express a plethora of biological activities. Our colleagues from Italy and Scotland prepared us a series of synthetic poly-APS analogues (APS) that we now use in our studies.

We are currently studying various biological effects of these synthetic analogues, in order to evaluate their potential commercial use in medicine, as compounds for treatment of the lung cancer. The anticancer activity of the compound APS8 was assessed on various cell lines, including the non-small cancer cells of the human lung adenocarcinoma (A549). APS8 acts as a non-competitive inhibitor of nicotinic acetylcholine receptors (subtype α7), that are highly expressed in cell membranes of the above-mentioned cancer cells and are activated by nicotine.

Binding of nicotine triggers anti apoptotic and proliferating signalling. APS as antagonist of α7 nAChR  can present one of the possible ways of the induction of opposite signalling pathways, thus leading to the selective apoptosis of these cells. The selective cytotoxicity for A549 cells was confirmed for the compound APS8. In these cells, APS8 induces an intrinsic apoptosis, and there are also some indications for triggering the extrinsic apoptosis. These in vitro results were confirmed also by the in vivo experiments, in which a triple application of APS8 was applied directly to the xenographs of the human lung adenocarcinoma in immunocompetent mice. The application of APS8 was shown to significantly inhibit the growth of the tumours without any toxic effects for the experimental animals.

APS8 induces apoptosis in NSCLC but not in normal fibroblasts. Apoptosis was measured by flow cytometric analysis of human lung adenocarcinoma A549 cells, squamous carcinoma SKMES-1 cells, and lung fibroblast MRC-5 cells. The cells were treated with APS8 (500 nM) for 48 h, and tnan stained with annexin V and propidium iodide. 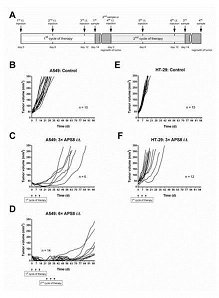 Other potential of APS biomedical use

Poly-APS form transient pores in membranes. In collaboration with a group from University of Aberdeen (Scotland) we found out that poly-APS caused a stable transfection of targeted cells with plasmid DNA. It can be also used for tranasport of tau proteins into neurons which help to understand the role of these proteins in some diseases like temporal dementia and Alzheimer’s desease.

In collaboration with a group from Genova we found out that these compounds have also strong albeit nontoxic antivegetative activity on submerged surfaces. They prevent settlement of Balanus amphitrite larvae and also prevent the formation of bacterial microfilms. These results make them promising candidates to include them as active compounds in antifouling coatings.

Clinical studies have shown that the use of cholinesterase (acetyl- and butyrylcholinesterase) inhibitors, that decrease the rate of acetylcholine hydrolysis, are a promising strategy in the therapy of Alzheimer’s disease, as it can reverse the reduced cognition and aberrant behavioural functions associated with this disease. In collaboration with research groups from Italy and Norway, we also evaluate cholinesterase inhibitory potential of different natural compounds of marine origin, and of their synthetic analogues.

Lipid-binding proteins (e.g. aegerolysins) and pore-forming toxins (e.g. actinoporins, binary pleurotolysins, bacterial cholesterol-dependent cytolysins) are characterized by their interaction with lipid mono- and bilayers of defined lipid composition and biophysical characteristics. In addition to the Langmuir air/water lipid monolayer, we have introduced preparation of artificial lipid nanodroplets (100 – 200 nm in diameter) as an alternative lipid form to study protein interactions with lipid monolayers. We are developing a method to produce stable nanoemulsions of nanodroplets made of triacylglycerides, covered with amphiphilic membrane lipids (sphingomyelin and cholesterol in particular), in water phase. 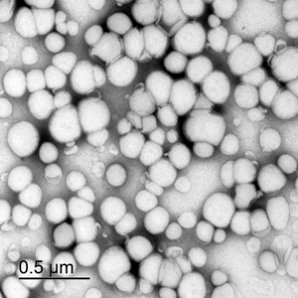 More research papers by members can be found here.