Background. Genetic research in domestic animals has important scientific and socio-economic effects in the field of medicine, health, welfare of domestic animals and agriculture in general. Due to the thousands of years of artificial selection of breeders to certain traits and of parallel-acting natural selection, especially on survival traits, rare local breeds present a unique source of genetic and phenotypic variability and are important also for food production, geographical and cultural identity. This proposal will be focused on the only autochthonous Slovenian goat breed, Drežnica goat. According to FAO criteria, Drežnica goat has the highest degree of risk before extinction, a so-called critically endangered status. This is due to a small population size and because it is now confined in a very small Alpine area of only 15-km radius. Research of such exceptional rare breeds is important from a scientific point of view and for preserving positive cultural and socio-economic effects in remote unpopulated areas.

Problem and objectives. In Slovenia, breeders have a strong economic pressure to switch or to cross local breeds with commercial breeds. Traits that local Drežnica goat still possesses, such as resistance to local diseases, adaptation to poor forage, homing and gregarious behavior represent key traits for the survival and farming in harsh Alpine environment. Genetic and ethnographic research proposed in here can help to characterize and preserve such traits as well as promote expansion of the breed. The aim of objective 1 is to provide a DNA-based characterization of Drežnica goat including genetic diversity (variability) and its relationships to other goat breeds, population history, maternal and paternal phylogeny. Drežnica goat has shared the East Alpine pastures for hundreds of years with another species, Alpine ibex. We have preliminary results (goat-ibex hybrid) and other supporting evidence that Drežnica goats occasionally still interbreeds with Alpine ibex. Objective 2 will check the hypothesis about the possibility and extent of the goat-ibex introgression.

Methods. For objective 1 we will employ the most advanced genomic approaches such as sequence analyses of the whole mitochondrial genomes, parts of chromosome Y and the autosomal genome analyses by SNP chips. For objective 2 we will try to infer Drežnica goat haplotypes in the genomes of Alpine ibex using whole genome SNP genotyping, sequencing the entire mtDNA and parts of chromosome Y.  As we also have an F1 goat-ibex hybrid available, we will characterize in detail its phenotype, reproductive traits including further backcrosses to goats. During the field work for objectives 1 and 2, the expert team from Slovene Ethnographic Museum (SEM) will join to complement the scientific part of this proposal with socio-ethnographic research.

Expected results and significance: Genomic analyses under objective 1 should bring novel knowledge of Drežnica goat-specific genetic population structure, diversity, new insights of post‑domestication migration routes and in reconstructing admixture. So-called  selective sweep analyses should uncover novel loci important for adaptation to harsh environments and to resist diseases. Climate change and the emergence of new and virulent animal diseases underline the need to retain this adaptive capacity. Objective 2 experiments should determine if there is genetic exchange between the Alpine ibex and Drežnica goat and potentially in all goat breeds throughout the Alps. This is important from the point of view of basic and evolutionary research as well as from the applicability in nature-protection programs for wildlife and breeders. The importance of complementing ethnographic study of Drežnica goat breeding practices is in preserving material and non-material (tangible and intangible) cultural heritage to save and help revive these practices in the future.

THE PHASES OF THE PROJECT AND THEIR REALIZATION

In addition, the project group collaborates actively with a leading foreign research group in the area of animal genomics (Ludwig Maximilians Universitat,  Munchen ) lead by prof. dr. Ivica Medugorac. In particular, this group has complementary expertise in the field of cross-species hybridization research, where they recently published an important study in a premier Journal of Nature Genetics on the subject of cattle-to-Mongolian Yak introgression of genes. Their expertise will be used directly in workpackage or objective 2 in collaboration with Professor Prof. Medugorac, where we will try to prove the transfer of gene segments from goat to Alpine ibex and vice versa. 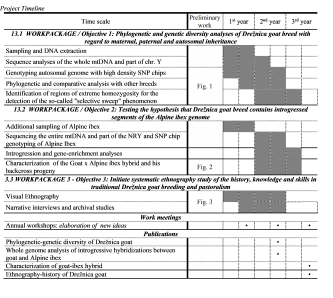