There is no content on this page at the moment.

Carnivores affect ungulates: determination of species-specific predation rate and the

Wild ungulates, especially the roe deer (Capreolus capreolus), red deer (Cervus elaphus), wild boar (Sus scrofa), chamois (Rupicapra rupicapra), fallow deer (Cervus dama) and the mouflon (Ovis amon) are important game species in Slovenia. It is important that their populations are managed in an adaptable, efficient, and sustainable manner, considering ecological, economical and sociological carrying capacities of the environment in which they live. Their potential predators are predominantly carnivores (Carnivora): Grey wolf (Canis lupus), Eurasian lynx (Lynx lynx), Brown bear (Ursus arctos), Golden jackal (Canis aureus) and Red fox (Vulpes vulpes). In addition, the potential influence of the wild boar must be mentioned, which appears on the one hand appears in the role of a prey species, and on the other hand as a predator (predation on roe deer fawns).

The presence of predators in the environment has a significant impact on prey and should be considered in management.  Predation, particularly by carnivores, is a major cause of e mortality of wild ungulates, which is reflected in abundances and densities, population trends and demographic characteristics. The consequences or effects of predation, which are not only reflected in the abundance of prey species, may be even more important, since predation may affect, among other things, the sex and age structure of prey populations, their physical fitness, parasite infestation, genetic characteristics and behavior. The latter is probably even more important than the impact on mortality itself, i.e. the influence of predators on the behavior of prey species. Due to the presence of predators, prey species (ie wild ungulates) are expected to become more cautious and alert, including changes in their circadian activity pattern, land use and group size.

Along with the Eurasian lynx, the wolf is the main predator of the wild ungulates in the temperate forests of Europe, where it mainly influences the abundance of red deer. Studies from Slovenia (wolf presence area) show that the mortality of red deer by large carnivores is around 7.8%. The diet of wolves is dominated by cervids (roe deer, red deer), which account for 85% of the biomass consumed. The wolf affects not only the abundance, but also the sex and age structure of cervids, since it preys mainly young animals and females.

Apart from wolf, the Eurasian lynx is the most important predator of large herbivores in Europe, which is also the most important predator of roe deer, so that the presence of the lynx should be mainly considered in the roe deer management. Roe deer normally represents in its diet between 50-99% of the biomass of its prey. In areas where both roe deer and red deer live, the lynx has a pronounced preference for roe deer preying. In the Dinaric Mts., the lynx preys mainly on roe deer, which account for 80% of the total l ingested biomass. The predation rate of the lynx in this area is on averages 54.3 larger animals per year, i.e. one larger prey per 6.72 days.

Compared to wolves and lynxes, the brown bear has less influence on the populations of some wild ungulates, since its existence as a generalist omnivore, does not depend on a sufficient number of ungulates.

The (Eurasian) golden jackal is a food generalist that adapts to the local availability of food resources. Numerous field observations and beliefs are known from Europe about the considerable negative effect of the jackal as a predator. Cases reported from eastern and central Croatia, where the number of deer has significantly decreased after 2012, probably to the predatory pressure of the jackal. Also from other European countries, e.g. Bulgaria and Hungary, a significant influence of jackals on the abundance of wild ungulates is reported, while a study on jackal food in Serbia showed that game (roe deer, wild boar, brown hare) was present in the jackals' food only in small amounts..

Research from different parts of Europe, has shown that the red fox, which is an omnivorous and opportunistic species, can prey between 13 and 25%, and even up to half of all deer fawns born in the current year. Predation is thus one of the most important factors influencing the survival of roe deer fawns, although its influence is more pronounced in open agricultural landscapes than in forest habitats.

Due to the complexity of predation and the associated effects on predatory species, our knowledge of this area is still quite incomplete. With scientific research, we are only gradually increasing this understanding. Large, complex problems need to be solved by combining already acquired knowledge and upgrading it with new one. Review of published foreign scientific and professional literature and synthesis and evaluation of the results of relevant domestic (CRP) or. international projects (LIFE, Interreg), in which the impact of predators on wild ungulates was also studied, will therefore be an important starting point for most of the research issues that will be addressed in the work packages of the proposed project.

The main goals are as follows (working packages (WP) are defined in accordance to these goals):

1. Make a review of the known findings on the impact of predators on wild ungulates. In addition to new knowledge from our research, it is necessary to know the experience and findings of previous worldwide research, in order to have a comprehensive understanding of the topic. We will prepare a review of published foreign scientific and professional literature and a summary of relevant parts of domestic (CRP) or. international projects (LIFE, Interreg).

2. Prepare a synthesis of findings on the impact of predators from previous domestic projects. In the past, several projects were carried out in Slovenia, e.g. LIFE Medved, LIFE SloWolf, LIFE Wolfalps, LIFE DinalpBear, Interreg Dinaris, Interreg 3Lynx and a series of CRP projects in which individual knowledge/parameters and results on the potential impact of predators on prey species were obtained. The results of individual parameters used to assess the impacts of a certain predator on an individual species of ungulate will be combined and adjusted in a form that will be suitable for further spatial and temporal analyzes of the impacts of predators.

3. Make spatial and temporal analyzes of the effects of predators on densities and (adapted) culling of ungulates. On the level of the whole of Slovenia, in spatial resolution, adapted to the needs of hunting management planning (level of hunting grounds), we will assess the absolute and relative (especially in comparison with hunting) influences of predators on population dynamics and sex and age structure of target ungulate species (roe deer, red deer, mouflon, wild boar). We will also assess how much it is necessary to adapt the planned culling of target ungulate species due to presence of carnivores.

4. Analyze the diet of selected predator species (carnivores, wild boar). Knowledge on the diet of predator species in particular environment, is one of the basic prerequisites for studying the cause-and-effect relationships between populations of predators and their prey species. The impact of foxes, jackals, bears and even wild boar on the offspring of wild ungulates, especially roe deer, will be assessed on the basis of the analyzes of the abdominal content and scats of predators, which will be intensively collected in late spring and early summer (May-July), when fawns are the most vulnerable.

5. Develop and implement methods for reliable determination of prey species by molecular analysis of carnivore scats. The effectiveness of identifying (prey) species based on the morphological determination of undigested food residues in the stomach or scats is often difficult, time consuming and limited. Therefore, we will develop a simple, meta-molecular approach for prey identification. The opportunity is in metagenomic approach based on the study of the genetic material of all organisms present in a sample, using a modern next-generation sequencing methodology (NGS).

7. To determine the effect of predation on the reproductive potential of roe deer and red deer. In recent years, we have performed several studies and obtained good data on the reproductive potential of red deer and roe deer. Comparison of primary and tertiary sex ratio showed that neonatal mortality of roe deer fawns has a very significant impact on changes in the sex ratio. At the same time, field observations indicate that the number of fawns led by an individual doe is significantly lower than the reproductive potential of deer or litter size before birth. Therefore, the impact of early mortality on the actual realization of the expected growth of deer will be determined with the help of hunters with intensive systematic field observation of deer and their young.

8. Prepare a proposal for the transfer of findings on the effects of predators on ungulates into hunting-management planning process. Effective transfer of new knowledge into practice requires understanding and acceptance of research results by planners and population managers, so based on the findings of the project, we will prepare a proposal for transferring research findings into practice. The goal is to prepare a proposal that can be effectively integrated into the wildlife-management planning and will improve it by considering the effects of predators when planning the numbers and structure of the cull of target ungulate species.

9. Dissemination and transfer of obtained results and knowledge to the end-users. We will publish several scientific and professional papers, provide several meetings with the most important representatives of key-stakeholders and work on connection between research and pedagogical work. In order to increase the visibility of the project, we will also make a project website.

The phases of the project and their realization

The project will take place in nine work packages, the approximate timetable for the implementation of individual packages is shown in the table below:

1. Make a review of the known findings on the impact of predators on wild ungulates

2. Prepare a synthesis of findings on the impact of predators from previous domestic projects

3. Make spatial and temporal analyzes of the effects of predators on densities and (adapted) culling of ungulates

5. Develop and implement methods for reliable determination of prey species by molecular analysis of carnivore scats

6. Determine the neonatal mortality of roe deer fawns, with focus on predation

7. To determine the effect of predation on the reproductive potential of roe deer and red deer

8. Prepare a proposal for the transfer of findings on the effects of predators on ungulates into hunting-management planning process

9. Dissemination and transfer of obtained results and knowledge to the end-users 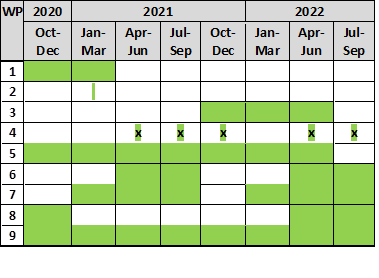